Binge drinking is a common problem, with the Centers for Disease Control and Prevention reporting that one in every six adults in the US binge drinks four times a month.

This issue is not the same as being an alcoholic and can often go unnoticed where drinking is a common and socially acceptable part of life. But this is what has led to concern where binging can cause just as much damage and certainly does carry its own set of risks when it comes to your health and well-being.

If you're concerned about your drinking or health and are ready to cut back or stop drinking altogether, here are some useful tips to help end your binge drinking and get full control back over your life.

Consider what Binge Drinking does to you

The first step is to take a long, hard and honest look at how much binge drinking is actually affecting your life. Is it causing strain on relationships? Or prevent you from having the energy to do what you want? In many cases it's simply recognizing the regular pattern of binging and hangovers. Maybe some mistakes are made or you become more conscious of your behavior or actions after certain events... Often the reality of binge drinking becomes apparent when people around you start to mention it, especially if it's work related issues due to performance issues or where a regular pattern of behavior and sick days begin to occur. But most important is the impact it could be having on your health, and any long-term damage being caused.

Consider the toll your drinking is taking on you, including how you feel when you experience withdrawal symptoms like nausea, vomiting and anxiety after you binge. Over time, binge drinking can develop into dependence or alcoholism, so take these risks into account, too.

Look at your drinking habits

According to the Foundation For A Drug Free World, binge drinking is generally defined as having four to five drinks at one time, usually over a short span such as two hours, or an evening out. The reality for most binge drinkers is actually far worse when there is regular (weekly and bi-weekly) sessions of drinking that include several rounds of shots and cocktails on top of 'usual' drinking behavior.

Other signs you are binge drinking include drinking fast, drinking solely to get drunk, feeling unable to control your drinking and having an increasingly high tolerance for alcohol - which leads to drinking more.

Make a decision and set goals

You will first need to decide whether you want to stop drinking altogether or cut back. Either way, it is all about you taking control or feeling that you have control of your drinking, rather than the other way around! Set goals in stages that will eventually lead to your major goal, which is whatever target you decide to set. To cut back, limit your drinking to set days and set amounts, such as only three drinks on Saturday and Wednesday nights.

If you want to quit entirely, make sure you set yourself a firm quit date to work toward. Note that if you have been drinking heavily, you may experience side effects if you stop suddenly.

These include fatigue, digestive problems, anxiety, and depression. Cutting down your drinking over time as opposed to quitting at once may reduce the type and severity of side effects which you experience. Though it has to also be said that the more effects you feel from not drinking, the more reason you have for making a change!

Talk about Drinking With Somebody

If you genuinely think you've got a drinking problem then it is highly advisable that you should talk to your doctor as soon as possible. They can help you identify what the safest way for you to reduce your drinking will be and refer you to other professionals who may be able to help.

Set some time aside to talk to their family as well. While it may be uncomfortable to admit you have a problem, it's important that your loved ones know you need to make a change in your life. Having supportive family members and friends around you will help keep you on track for your goals.

Let your regular drinking friends know that you are concerned your fun is developing into a serious problem. Tell them you are not asking anyone else to stop drinking and you are not judging them either - you just want their support.

If you feel you can resist temptation, express that you still want to socialize with them but just won't be drinking much or at all. However, if you don't think you can be around alcohol, you will want to let your friends and family members know.

Work out your triggers

Think about what the triggers to your binge drinking are so you can address the problem at its roots.

If you are drinking because of a person, for example, it's time to reassess your relationship with that person. But if your drinking is related to stress, it's time to learn how to relax and find more productive outlets for stress reduction.

Creating a drinking journal, in which you log the details each time you drink, can help you identify the triggers in your life so you can address those problems.

Holding yourself accountable is crucial when you are trying to cut down or end your drinking. In your journal, keep track of any slip-ups you have, such as going over the limit you set or drinking on a designated non-drinking day.

Talk to a trusted friend or relative about your struggles and mistakes, one who won't judge you but won't let you sugarcoat things, either.

Find and join a local support group and go to meetings regularly, as being with people experiencing the same thing as you can really help you make progress.

While this part will be difficult, start avoiding people who will make you want to drink. Heavy drinkers, competitive drinkers, stressful friends and toxic people, for instance, aren't going to make the best company for you right now.

Ride through your urges

You will experience the urge to drink here and there; there's just no avoiding it. Rather than fighting that urge, accept that it is happening and ride it out. An urge will only rise so far; it does break and fall, like a wave, so keep that in mind.

Accepting an urge doesn't mean you're giving into it; instead, you're just not forcing yourself to have a different feeling. Pay attention to your body and your breathing to give yourself something else to focus on as the urge passes.

Call a close friend or family member to talk through it if you need some extra support or just want the distraction.

Work on your stress levels

As mentioned above, you will need to find healthy ways to handle your stress - ways that don't include alcohol. This could be meditation, lifestyle changes, counseling or a mix of all three and more.

Learn to recognize when you're craving a drink because of a stress-inducing situation, so you are more prepared to go for an alternative when you're in such a scenario again.

Getting a new interest or hobby can help with stress levels and give you something to do, as sobriety can seem a little boring at first if most of your free time was spent drinking with friends. Self-hypnosis, which is well known for its relaxing effects, can ease your stress and help you learn how to relax more fully. You can try a Stop Binge Drinking Hypnosis track here.

Exercise can boost mood, ease stress and bust anxiety per the Mayo Clinic. Working out will also occupy your time and make drinking seem less appealing.

Reward yourself when you earn it

It's more than okay to reward yourself for your sobriety periods, as this provides motivation. Set rewards for your given sobriety milestones. For example, you can go out for your favorite meal after you've made it a week without a drink. Set a really great reward for hitting a year, such as taking a trip you've always wanted to go on. 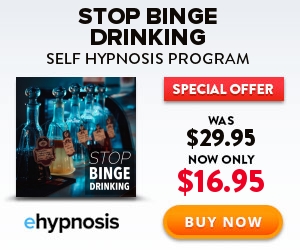