How To Develop Charisma Or A Charismatic Personality

But what exactly is charisma? And if you're worried that you're not charismatic, is there anything you can do to change that? The good news is that charisma isn't innate.

Rather, it's something that can be learned and honed over time - a skill rather than an inflexible trait.

For example, we'll look at how anxiety and introversion influence judgments about whether a person is charismatic. Next, we'll break the notion of charisma down into three key parts.

Finally, we'll offer four techniques you can use to build your own charisma, starting today.

Am I Uncharismatic Or Boring?

Have you ever been told that you're just not that charming? Perhaps you haven't been told this explicitly but have always worried about it.

If you find yourself asking "Am I charismatic?" and thinking the answer is no, there are many different possible reasons. It's important to differentiate being charismatic from being boring, too.

While you may not have an outgoing personality that habitually draws others toward you, this doesn't mean you're being.

Instead, you may simply be a quieter person who takes a while to get to know others. With this in mind, let’s think about the difference between extroversion and charisma.

Can An Introvert Have A Charismatic Personality?

The typical charismatic person is an extrovert - they speak loudly, are in charge of social situations, and become more energized the more people are around them.

If charisma doesn't come easy to you, consider whether you may simply be introverted. Some of the key signs of introversion include the following:

As suggested above, introverts can become charismatic. It just requires honing a new, different set of skills.

In particular, you'll need to learn how to share with the rest of the world the things that your close friends and family value so much.

Can An Anxious Person Be Charismatic?

Underlying anxiety is another reason why you might be less outgoing - and therefore less obviously charismatic. Social anxiety is particularly relevant here.

If you feel awkward and nervous when talking to others, worry about being in large social groups, or actively avoid meeting new people, you will have little opportunity to demonstrate charisma.

The trouble is, normal isn't that interesting! And so you can easily be overlooked for people who are more confident or superficially charming.

All because you're afraid that you'll be negatively judged if you show your authentic personality.

By working on addressing your social anxiety, you can create space for a more charismatic version of yourself to emerge. However, even if you remain somewhat anxious, there are tricks you can use to turn on the charm.

Before we get to those tricks, we should analyze the idea of charisma just a little bit more. In particular, let's look at the main magnetic traits that charismatic people tend to be known for.

What Are Charismatic Personality Traits?

What is charisma, exactly? When you think about people you take to be examples of charisma, you'll notice how different they can be. Some are self-effacing, others almost arrogant.

Some tell lengthy stories, while others make you feel like you're the only person in the room. However, there are certain core traits that most charismatic people have in common - and most of them are connected to social skills.

Here are the three traits you'll need to hone to be magnetic.

Charisma comes with an appealing kind of emotional expressiveness. What this means is that highly charismatic people freely and honestly express their emotions.

They show their joy and invite you to share in it, and they are truthful about the things that make them sad or angry. And the link between charisma and emotions isn't merely about spontaneous expression.

It's also about the way charismatic people conduct their relationships. In particular, you can expect them to be open and interested when you try to instigate an emotionally significant conversation and to have useful insights about what you are feeling.

The background has a lot to do with whether people develop this facet of charisma. If you're raised to hide or suppress emotions, or if someone tells you that strong feelings are for the weak, it's hard to be emotionally expressive.

However, it is certainly a skill that can be learned.

In addition to being highly emotionally expressive, charismatic people have a positive relationship with emotions more broadly.

This means they have good emotional regulation skills. They don't lash out in anger or take the fear out on other people. Rather, they are able to choose what to share with others and to share these feelings in a mature, appropriate way.

Their emotional control also typically means they have healthy emotional outlets such as meditation, physical activity, and creative expression (as opposed to self-medicating through drugs, alcohol, or food).

This aspect of the charismatic personality means that such people are also not easily put off by the strong emotions of others.

This means that you can have a truthful conversation with a charismatic person about what's going on in your friendship or relationship with them.

They are more self-reflective than the average person and less defended about the idea of personal change.

As the above two emotion-centric traits suggest, the charismatic person also has great social skills.

For one thing, this means having good manners and showing respect to others, regardless of who they are.

Crucially, these social skills make the charismatic person wonderful to have in a group, as they don't hog the limelight in spite of being extremely interesting.

Rather, they invite everyone in a group to contribute equally and are experts at noticing when someone might be feeling silenced or on the outskirts of a conversation.

As a consequence of their advanced social skills, a charismatic person also typically does very well in their work environment.

They may be especially suited to public-facing jobs where their magnetic, gracious personalities help to represent a company or a brand in a positive light.

How To Be More Charismatic With Others

Now that you have a clearer idea of what charisma involves, we can explore how to become more charismatic in your own life.

As you'll now see, it's not merely a matter of learning how to be charming. It's also about learning to relate to others in a more refined way.

Let's look at three ways you can enhance your charisma right now, then consider how hypnosis might be able to give you the fastest, most effective charisma boost.

Self-confidence helps you present yourself in an authentic way.

This will automatically boost charisma, as it helps you embody the above three traits - great social skills, genuine expressiveness, and self-regulation.

Developing and maintaining self-confidence is a lifelong journey, but as a starting point try to regularly remind yourself of your most positive traits.

Saying daily affirmations can help you keep this favorable view of yourself in mind.

Remind yourself that it's better to make connections based on your real self rather than a projected image of the person you think others might want.

In addition, hold strong boundaries with other people - don't let them walk all over you.

There are several things you can do to focus on boosting the emotional expressiveness component of the charismatic personality. Firstly, try to make yourself maximally approachable.

Demonstrate open body language, such as leaving your arms uncrossed and holding eye contact with people you're talking to. Be honest about some of your struggles and about your own fallibility, so that others see your humanity.

Secondly, express yourself in a more open way than ever before. Take some risks in what you let other people know about you - this will foster deeper connections and attract people to you.

Focus And Pay Attention To Others

When we think of charisma, we often first think about how a person comes across when they are center stage.

However, charisma is just as strongly influenced by how well you listen to others - you’ll want to show you know life isn’t all about you.

You instantly become more likable and appealing when you listen to others with interest. Work on honing your active listening skills by reflecting back on what the other person has said to show them you understood.

Express empathy, too - show you can see why others feel as they do, and embody a non-judgemental attitude.

A good listener gives exclusive focus to the other person, so resist the urge to check your phone.

In addition, make sure you bring the conversation to a natural end, summing up what was said between you. Abrupt disconnection leaves people feeling uncomfortable.

Ultimately, to be at your most charismatic you want to develop a fine balance between talking and listening. This gets easier with practice and can vary depending on the audience.

Look out for cues from the other person that tells you whether they're fully engaged with you.

Are they leaning forward, nodding, and holding eye contact, or are they fidgeting and looking around the room?

Learn To Develop A Charismatic Personality With Hypnosis

At this stage, you know more than before about the ingredients of charisma. More importantly, you have some tips and tricks to help yourself become more charismatic.

However, as indicated above, it can take a long time to develop and improve the skills associated with charisma. In particular, low self-confidence is the greatest barrier to charisma, often requiring years of hard work.

If you want a shortcut to charisma, a quick way of building your magnetism, self-hypnosis is one of the best possible tools.

In our 'Develop Your Charisma' self-hypnosis program, we tap into your subconscious mind to help you become more confident. This provides you with the perfect basis for building the emotional expressiveness and great social skills that the most charismatic people have. 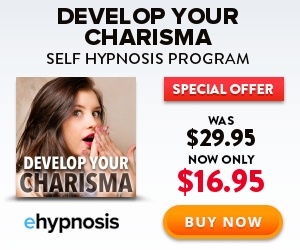